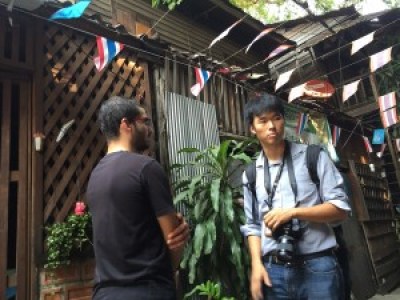 Dake Kang is an American cross-format journalist, based in the Beijing bureau of the Associated Press. Before Beijing, Dake reported for the AP in Cleveland, and in 2016, he was the Fritz Beebe Overseas Press Club fellow at the AP’s Bangkok office and an intern and stringer for the AP in Philadelphia and New York City. He cut his teeth in TV and investigative data journalism at CNN, the Times of India, and Fox News. Flexible in all mediums, Dake’s writing, photos, and videos have appeared in outlets ranging from Bosnian National Television to the New York Times. He was raised in Korea, China, and the United States, and is interested how the internet and new technologies are transforming societies in Asia and America.

Dake went to the University of Chicago, where he majored in history and math and wrote an award-winning thesis on the construction of Beijing’s first subway. He’s interested in data, satellite imagery, and open source intelligence techniques, and is HEFAT trained and an FAA-certified drone pilot. In addition to his native English, Dake is proficient in Mandarin, conversant in Korean, and struggling in (but learning) Arabic.

In his spare time, he likes to read, travel, and meet new people. He’s best reached via email.